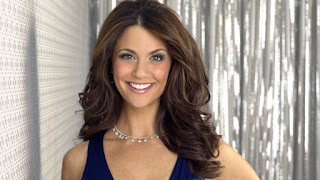 Could someone please trip Samantha Harris on Dancing With the Stars? Was ABC REALLY that hard up for a Dancing With the Stars host? I mean c'mon. Her dresses are pretty. There. I said something nice. But, I can't stand her. She's anything BUT charming and is so awkward. I vote her off. Join me anyone? 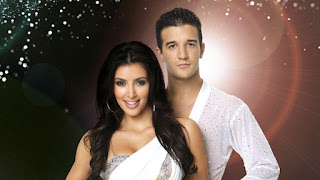 Thank heavens Kim Kardashian got the axe! She was like concrete. Poor Mark danced his heart out and she looked like a wilted mess. Don't get me wrong-- she's beautiful. BUT she was a joke. Let's hope Cloris is next. A little too much old woman cleavage for my taste. 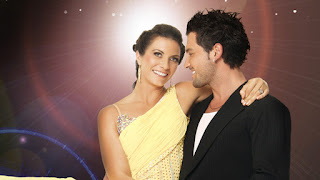 One person I'm rooting for is Misty May-Treanor. Everyone knows she is an amazing volleyball player, but how many of you have MET her? (Carrie inserts raised hand here) The summer after my freshman year in high school, our volleyball team traveled down to Long Beach, CA for volleyball camp. Misty May was there (she had just been named as the national player of the year as a setter) and I mustered up the courage to ask her if my friend/teammate, Kristen Child, could get our picture taken with her. And we did! She was really nice and of course amazing to watch in demos. As for dancing, I think she's holding her own thus far. She could beat anyone down with that bicep of hers.
Posted by Carrie at 7:04 PM

Carrie...
I'm not a faithful watcher of Dancing with the Stars....but after reading this post, I think I may have to start watching...too funny.
P.S. Could Ruby be any cuter...Seriousl!!

i almost wish i was watching this show. almost. i'm rooting for misty may, too. an athlete who can dance? that would impress me.

i'm loving the clothing model, ruby. she looks so fun to dress up.

I really dislike the host too. I always check out her dress then do something else while she talks. Why do they always need to be interviewed right after they get their scores? They always say, no I feel good about it. We're happy. Aren't Lacey and Lance gross? But then I just watch it to see them and then Misty May is still manly. Those arms! I'm pulling for her, though, now, because I have a cousin who's met her...fancy that.

Carrie, your baby is gorgeous! It looks like you are enjoying being a mama. It's a ton of work, but the rewards are endless. Glad I came across this and your darling family. Take care, Jamie

Im not a dancing w the stars fan but I'll agree w you. I have to many shows already. Hope you don't mind that I looked at your blog but holy stinkin cute RUBY.. She is such a little doll and her eyes are stunning. You made a cute baby. Way to go. I love how you and Mel are so close. Aren't sisters the best. Well some anyway. Tamlyn and i are really close to and I love being able to just call her up and chat about nothing. Hope youre doing well. You look so happy. congrats on the little one. They grow so fast huh.

If you'll note, I was the first to say how much we dislike Samantha. http://givinginblogger.wordpress.com/?s=dancing+with+the+stars. She tries so hard, and fails even harder. We record the show rather than watching it in real time, just so we can fast forward through anything she says. And have you noticed, this season she's not nursing. Hehe.

That's fun you met Misty May! We're rooting for her too, but I must say, she's a lot of muscle out there on the dance floor. I think sometimes she's going to knock Max over.

Love you guys! We miss you.

We so agree with you!!! Every week Josh is alwasy saying how much she just "bugs" him. And every week, I say, "Yes, dear, I KNOW!!" And Miss Ruby is Rockin' those tights!!

I am impressed with the pumpkin pie. Nice Work! Ruby looks cute as ever.

Love the pics of Ruby. She’s so cute. I’m honored to share my birthday with Ruby’s half birthday. Way to keep the pumpkin pie tradition alive, Care.

I've been a fan of DWTS ever since ESPN's Kenny Mayne gave us this great performance http://www.youtube.com/watch?v=oK9QoVNdljc
(especially watch his post-dance interview). Kristen was not a fan at first, but has since converted since Layni loves to dance around with her blue blankey to "The Princess Dancing Show," and cries if Kristen changes the channel.

I was pulling for Misty. She’s more powerful and athletic than all of the male dancers (I’m talking to you, Derek Hough). I think it's a shame that she’s spent all that time training and winning in volleyball, only to have her career put in jeopardy in a dancing show. Let's all give a prayer to the Tachikara Gods that her Achilles will heal and she can win more gold metals.

I gotta find that picture! I'm glad you remembered it, too. I bragged about it during the olympics, but not everyone seemed impressed. Maybe they just didn't believe me.